So, as you may be able to tell from how many photos I took at Magic Kingdom, that it is absolutely our favorite park out of the four! I bet it’s everyone’s favorite! It’s the most recognized park, and what people think of when they hear “Disney World”. There’s such a wide variety of rides, and attractions. Everyone can find something they’ll enjoy here. We found loads to do, and ended up spending a least two days total there (broken up in pieces of course) 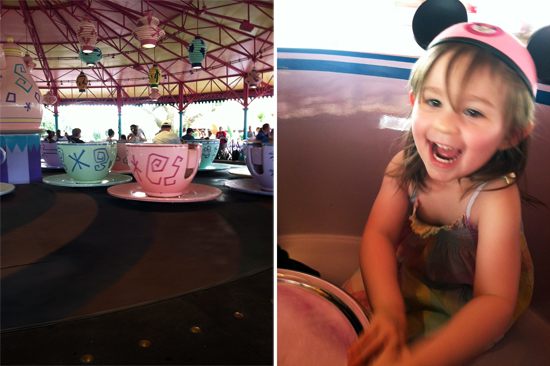 CT loved the tea cups the most, as you can see above. We rode that one more than once! She also really enjoyed the Peoplemover, “it’s a small world”, Peter Pan’s Flight, Prince Charming Regal Carrousel, The Many Adventures of Winnie the Pooh, and Dumbo the Flying Elephant (which has an awesome waiting area now, fully air conditioned!!). she DID NOT enjoy Pirates of the Caribbean! that was a bad choice on our part. It was too dark and she didn’t like that first drop. She could have fooled us, because afterward she wouldn’t stop singing “yo ho, yo ho, a pirates life for me…”. Ha!

We stumbled on something really cool one of the days we were there. Disney is building a whole new section of the park, all the way in the back. It’s going to house a few new restaurants, rides, shows, and two new castles!! The Beast’s castle and Eric’s Castle, I believe. Most of it is already built and a little bit is open (like the new, double, Dumbo ride with that air conditioning I talked about). We were being really nosy while trying to take pictures of one of the castles (pictured above), when we found a hidden door to the new section. The “cast member“ guarding the entrance told us we could come in and test drive one of their new attractions! It’s called Enchanted Tales with Belle and is an interactive play. It takes places in Maurice’s house (her dad), which I have pictured right above. They take you in and choose different kids to be part of their interactive play, CT was chosen to be an enchanted frame. We were a little weary she’d freak out, but she seemed happy she was chosen. The play is a shortened story about how Beauty met the Beast. It was really cute! halfway through it was CT’s turn to get up and be part of the play, but instead of getting up she freaked out and started screaming. I guess she has a little bit of stage fright. It was really neat being able to see everything they’re building behind those hedges, and it really makes me want to visit again after its all finished, which should be in about a month and a half!

As with the other parks, we put aside a lot of time to meet all the characters we could. CT was able to meet Alice, Minnie, Buzz Lightyear, Tiana, Rapunzel, Flynn Rider and Cinderella with her Prince. She was also able to meet Snow White again, which as you can see from the photo above, she loved!! She filled up almost every page of her autograph book, which made her very happy. I’m thinking of scanning all the autographs in and making a little Blurb book for her. She loves books, so I bet she’d love a book with pictures of her in it! Have anyone of you used Blurb? How was the quality?

So, I have more photos to share from Magic Kingdom, but they’re all from the Mickey’s Not So Scary Halloween Party, which really deserves its own post. Oh and as I’ve said before, if you’re interested in seeing more photos from our trip, you can find all of them in my Flickr account.